Worldictionary is a translation app for iPhone that allows you to use the built-in camera to detect and translate words on the go. The only language I understand other than English and the various programming languages I've picked up is Latin, so an app to help me understand various signs and documents in foreign countries is definitely useful for me! 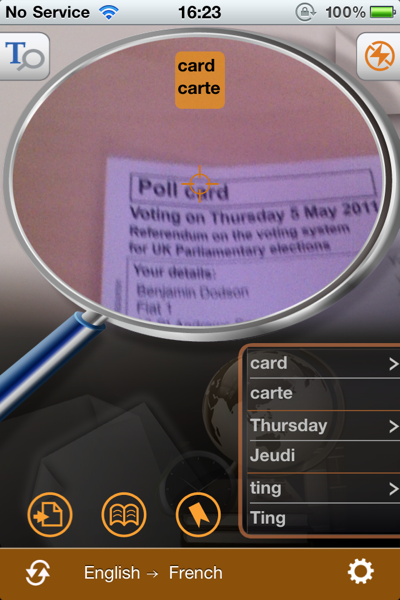 When you launch the app, the camera is activated and you can instantly begin translating. All you need to do is line up the magnifying glass with the word you want to translate and it will automatically appear at the top of the app. The word it thinks it detects is displayed on top with the translation underneath. 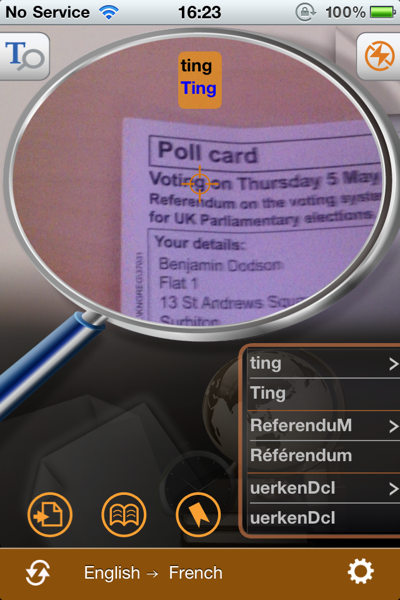 As you can see from the image above, the camera doesn't always detect words cleanly (more examples can be seen from the history panel in the bottom right corner) but it is very fast at detection so these issues don't interfere too much. The app isn't designed to work with handwritten fonts but should work with anything in a regular font. The example document I'm using is a polling card for the upcoming election referendum here in the UK. 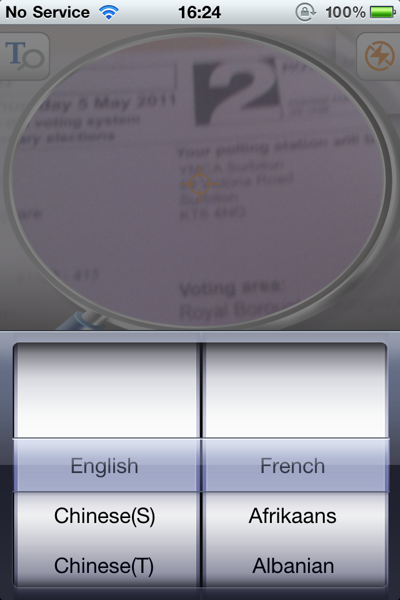 To change the language, tap the bar at the bottom of the app which brings up a scrollable view listing an impressive number of languages to convert to and from. These are all available by default so there is no in-app purchase for language packs as per some other translation apps. 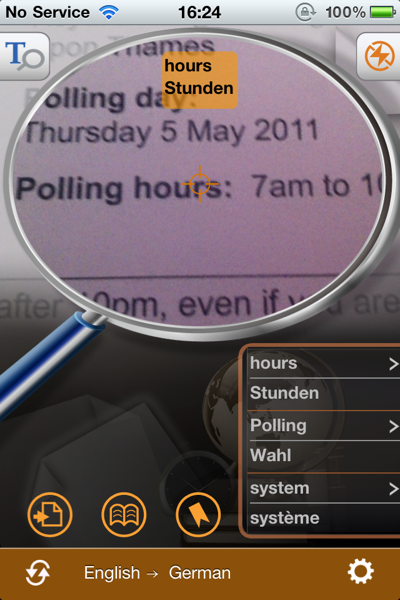 Once a new language is chosen, you can start translating instantly. I was struck by how fast detection and subsequent translation was and I experienced no problems with the app such as crashing or memory problems. 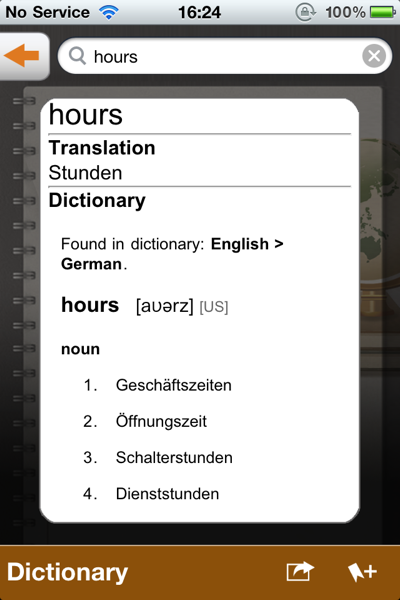 You can tap the translated words or tap any previous translations listed on the right hand side of the app to go through to a more thorough translation detailing example usage, structure, synonyms, and definitions from the web (including services such as wikipedia and online dictionaries).

Whilst the translation is good and the app does what it says, I did encounter 2 problems which may stumbling points depending on your usage.

Firstly, the app only detects single words, not sentences or paragraphs both in camera mode and the manual input mode. This might be fine for the odd word lookup but isn't terribly useful for something more involved such as a menu or road sign. Also, without understanding sentences, words in some languages may not make sense (as many languages have words with different meanings depending on the surrounding words). Whilst understanding full sentences is still difficult for translation algorithms, I do think the app would work better if it could at least do the per-word translation on an entire sentence so you don't have to slowly input each word individually. 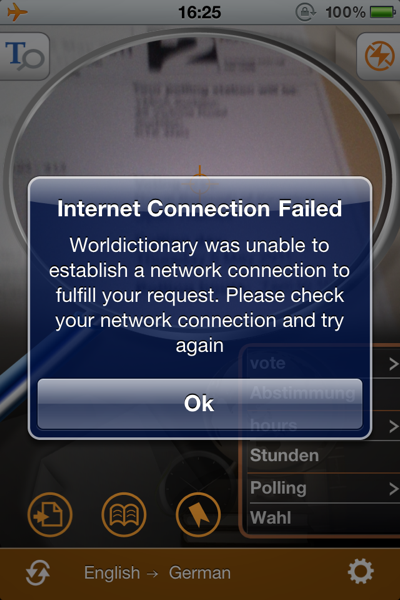 The second problem is more important from my perspective but is also something that is unlikely to be fixed; you need to have internet access in order to perform translations. This is because the translation engine being used is Google Translate and therefore doesn't have offline access. The reason this causes problems is that many people travel abroad where data roaming charges are still completely excessive (I was charged £6 per MB whilst I was in the US recently) and therefore switch their data roaming off. The benefit of a translation app is that you can use it anywhere when you need it (e.g. translating a menu at a restaurant) and you may not have WiFi available - turning on the data roaming for translation could become an expensive habit, particularly if you haven't turned off other apps or push notifications before making the switch. Whilst the API calls the app makes should be fairly small, I'd be more worried about forgetting to turn off data roaming after I'd used the app.

Whilst these problems are present in other apps, there are some which manage to solve both of these such as Word Lens which gained a lot of publicity when it first launched due to the clever way in which it uses the camera not only to translate, but also to place the translated words back into the original camera image. It might be a more expense app with translation packs at £5.99 each, but it works offline and can translate whole sentences (in a very cool way). Unfortunately, Word Lens only works with English and Spanish translations so is not terribly useful if you are going to France or Germany for instance.

Worldictionary is a clever app with its word recognition and fast translations (depending on network speed) but its lack of sentence recognition and reliance on internet connectivity lets it down. If you can look past these issues, then I can recommend it as a good translation tool for those times when you need a rough translation or have a need for multiple languages.

Disclosure: I was given a free copy of this application to review. I tested it on an iPhone 4 running iOS 4.3.2. If you have an app for iOS that you would like me to review, please contact me.