A little while ago, my chiropractor recommended that I take up the “Couch to 5K” program in order to improve my fitness in a way that wouldn’t see me literally running before I could walk. It was a huge success and I was able to lose a significant amount of weight and improve my overall health. Unfortunately, the 2020 lockdowns and the birth of a new child meant most of that effort was undone and I found myself once again needing to embark on a gradual increase in exercise.

One of the key features of Couch to 5K is that you do intermittent bursts of running and walking; for example, in the first week you’ll do three runs consisting of alternating 60 seconds of running (x8) and 90 seconds of walking (x7) sandwiched between a 5 minute warm up and cool down. To keep track of this, I used the free NHS Couch to 5K app which tells you what to do at each stage via an audio voiceover which also offers encouragement throughout your run. This worked well for me as I listened to music whilst doing my runs, but nowadays I prefer to run whilst watching TV shows or YouTube videos on an Apple TV in front of my treadmill. For this use case, audio interruption wasn’t necessarily what I wanted, especially as I was already vaguely familiar with the different run timings. Instead, I wanted an app on my Apple TV that could show me my run progress in a Picture in Picture window.

Introducing “Chaise Longue to 5K” (after all, couches are so common): 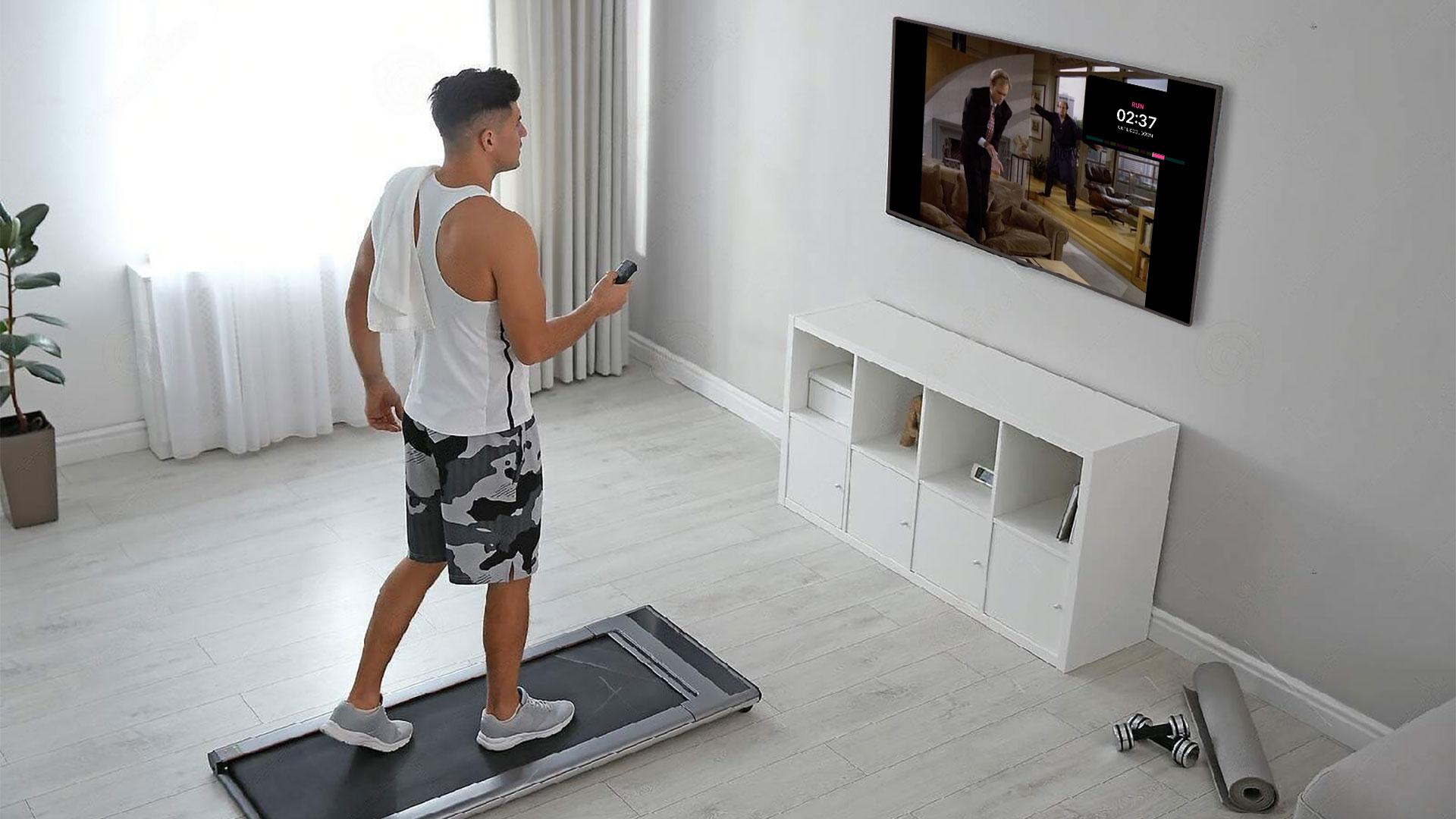 The idea is straightforward enough; you open the app to a grid showing all of the available runs1 and then navigate to a fullscreen running page with a timer and coloured blocks that show what you should be doing. This can then be shrunk down into a Picture in Picture window so you can see the critical information whilst you watch something else.

Originally I’d planned to use the new AVPictureInPictureController.init(contentSource:) API that was introduced with tvOS 15.0 as that would allow me to fairly easily render the UIView of the run screen into the PiP window; unfortunately, there is a bug with tvOS which prevents that from working and is still present in the tvOS 16 betas.

My next plan was to have the app render a video of the run on the fly. Essentially I would display the running UI, snapshot it with UIView.drawHierarchy(in rect: CGRect, afterScreenUpdates afterUpdates: Bool), and then pipe the UIImage into an AVAssetWriter at 1 second intervals to generate a video. Unfortunately that proved too intensive for the Apple TV hardware (especially the non-4K model) with the render taking a couple of minutes for each video. However, as I’d already built the render pipeline, I instead updated the system to generate all of the videos sequentially and store them; I then ran that in the tvOS Simulator to generate the 12 videos2 and then bundled them in the app. Much easier 🤣

The final part was to add a button to the top of the run selector page that would show you your next run. To do this, I store the week and number of the last run that was completed3 within NSUbiquitousKeyValueStore; this is a similar API to UserDefaults with the advantage that it is synced through the user’s iCloud account meaning it’ll survive reinstallations or switching to a new Apple TV without restoring from backup.

However, that led to an interesting idea. Could I port this to other platforms? And if I could, would I be able to do it in a single day? 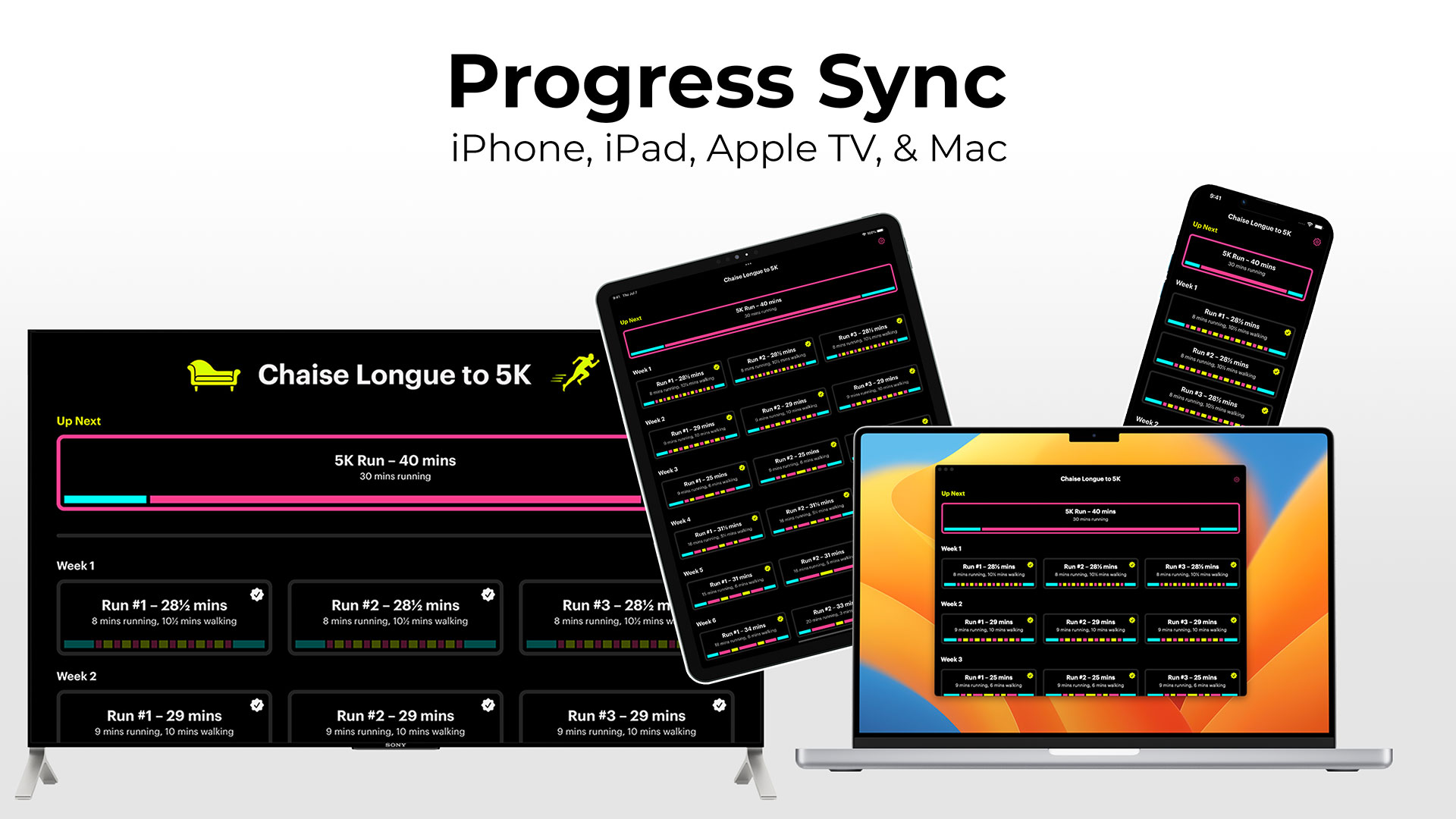 Despite using UIKit rather than SwiftUI, I was able to port everything over to iPhone, iPad, and Mac within 5 hours or so. I started by rejigging the project files so shared code would be separate from the xib files I use for the interface. I then added a new target for iOS and went through the laborious process of recreating the xib files; unfortunately tvOS and iOS xibs are incompatible even so far as you can’t copy and paste standard elements like UILabel between them.

The design was such that it was quite easy to make it work for iPhone. The run page itself just needed some font size adjustments whilst the grid view showing all of the runs had some stack views tweaked so they were shown vertically rather than horizontally.

The next step was to optimise the design for iPad. Again, this mostly worked out of the box as I use AutoLayout for everything. I just needed to monitor trait changes and update the code to render slightly differently depending on whether we were in compact or regular width mode. This had the nice side effect of enabling the three column layout on an iPhone 13 Pro Max in landscape and also working across the various split screen views that are available on iPad.

Finally, I checked the box for Catalyst support for macOS and was surprised to find that everything pretty much worked out of the box. I only needed to add the following code to get the app looking just fine on the Mac:

That code effectively hides the toolbar so the traffic light window management buttons blend into the app view and then restricting the minimum view size to that of a regular iPad so you can’t break the layout4.

With that done, I then went through the app and added a few quality of life improvements such as a native menu bar on the Mac, keyboard shortcuts for Mac and iPad, and adding the ability for PiP to automatically engage when you leave the app during a run on iPhone and iPad.

SwiftUI would undoubtedly have made the UI faster to port, but I still think the platform is too immature for full app development. As Richard Turton put it:

SwiftUI allows you to move so incredibly fast that by the time you realise what you want isn’t yet possible, you’re already off the edge of the cliff, like Wile E Coyote

That certainly matches my experience 🤣. Whilst it can be a phenomenally quick tool for building UI, it can’t quite match the smooth experience that users expect when it comes to the small but crucial details. 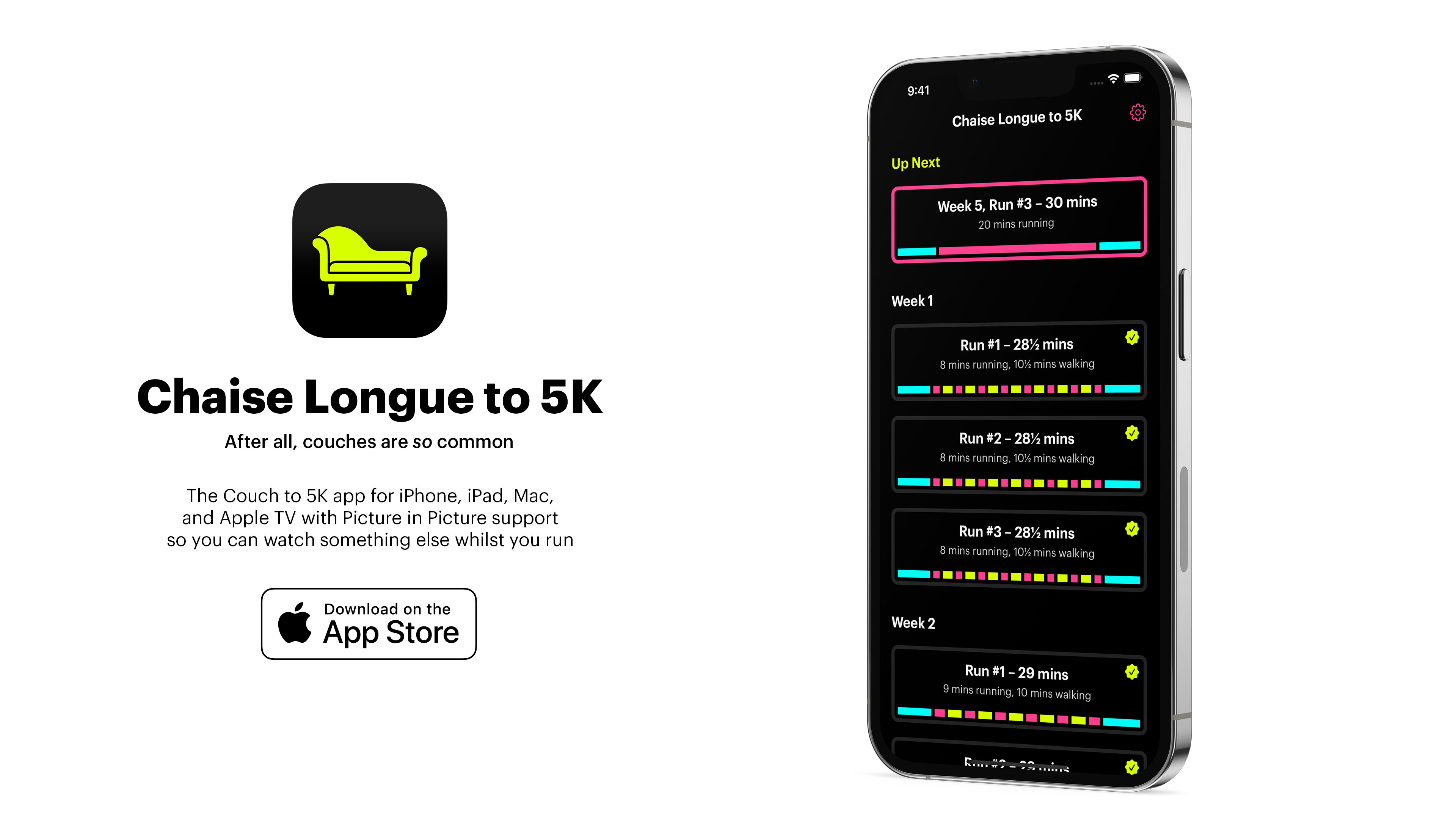 As I’ve said many times before, one of the great joys of being a software developer is that you can build apps bespoke for your own needs and interests. I’ve massively enjoyed having Chaise Longue to 5K on my Apple TV whilst doing my runs, but I also really enjoyed the challenge of porting the app across to all the other Apple platforms that support Picture in Picture5. As ever, there are a number of small details that I’d like to highlight:

I’d love it if you would give Chaise Longue to 5K a try. It’s available now on tvOS 14 and above, iOS / iPadOS 14 and above, and macOS Big Sur (11.0) and above. One low price unlocks it across all platforms.