In my article yesterday following up on the WWDC keynote, I mentioned that I'd be looking more deeply at the AirPlay Mirroring mode in iOS 5 as it holds a number of interesting surprises. Whilst the ability to mirror the content of the iPad 2 wirelessly to the Apple TV is still impressive, the fact that developers can utilise the existing TV-Out functionality to use the Apple TV as a secondary screen is much more exciting.

Before I look into that, let me go over a brief introduction of what AirPlay Mirroring is and how it works. At the moment, it is only supported on the iPad 2 due to it's superior CPU (the A5 chip which is widely rumoured to be making an appearance in the next iPhone and next Apple TV allowing for full 1080p resolution... at last). To enable it, all you need to do is go to the usual AirPlay icon hidden in the multi-tasking tray and you'll find a new option that allows you to enable mirroring mode. 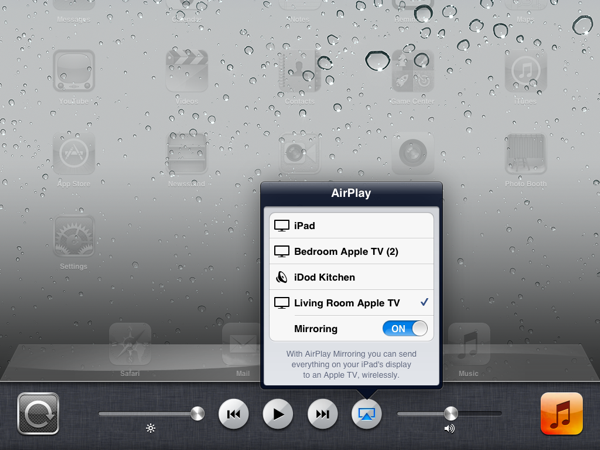 As soon as this is enabled, anything that is displayed on the iPad is instantly displayed on the Apple TV as well. If you rotate the device, the screen rotates on your television as well and it works with every app. If, like me, you've been waiting for the BBC to update their iPlayer app to work with AirPlay, you need wait no longer - the mirroring feature works with every single app (with no way of stopping it) as it is baked into the OS so you can stream content from any app to your television.

However, whilst that is impressive, my later discovery has much more potential. Every since the Apple TV was announced, blogs and forums have been full of people saying "we want apps for the Apple TV". I have always felt this to be a bad move as a) there is limited space on the Apple TV and b) they would suck. Why, you ask? Well, the Apple TV only comes with a standard Apple Remote with it's 4 directional buttons, and the "play" and "menu" buttons. This might be good enough for basic browsing through a filesystem (although text entry is a pain) but it's not conjusive to the sort of experience iOS users have come to expect from their apps. I have always maintained that the best option would be to allow anybody with an iOS device to transmit apps to the Apple TV as a secondary monitor as you can then display content on the big screen and use the iPhone or iPad to control it with touch gestures.

Luckily, that's what Apple have done.. they just haven't told anyone. 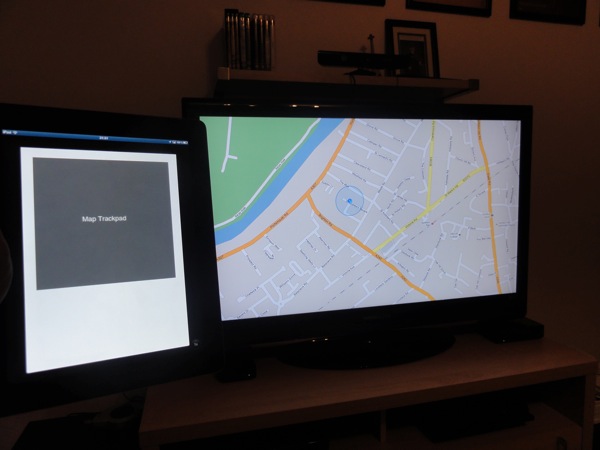 This is a screenshot of a test app I built for the iPhone last year called "AirMaps". Originally, I used an iPad-to-VGA adapter to plug the iPhone into my screen. The app was a simple trackpad that allowed you to manipulate Google Maps on the television. It works well enough with pinch, double-tap, etc, but having to plug in via a cable was always going to be arduous. However, now with the AirPlay mirroring any app with TV-Out functionality will automatically broadcast it's secondary screen to the Apple TV. This is exactly what I've been talking about for the past year.

"Now", you might say, "that all looks rather fancy, but what are the real world implications". In a word, gaming. This feature, unmentioned though it has been, is going to bring iOS gaming to a new level. With this functionality, you can now turn the Apple TV into a games console (and a particular cheap one at that when you consider hardware and software costs).

By way of example, I have loaded up "The Incident" on my iPad 2 and iPhone. This game made some headlines a few months ago when it announced it was adding TV-Out in a rather special way. You could plug your iPad into the television with the cable, but then use WiFi on the iPhone to control the iPad app (which in turn was broadcast to the television). This was much better than the previous route but still meant you needed 2 iOS devices and a £50 cable. Now with AirPlay Mirroring on iOS 5, this functionality works out of the box without the need for the cable. 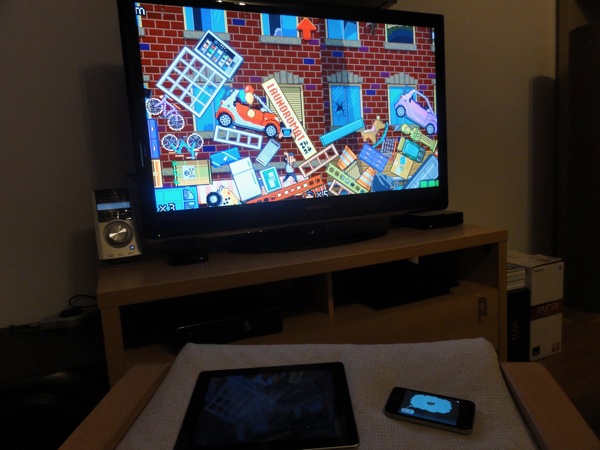 The iPad is connected wirelessly to the AppleTV thanks to AirPlay mirroring, and the iPhone is connected to the iPad over WiFi to enable it to work as a controller. Amazingly (considering it's running at 720p), the whole thing works incredibly quickly and responsively. Obviously, this setup is rather convuluted (as you still need an iPad 2 and an iPhone) but there are other apps that will work with just an iPad 2. For example, you can now present using Keynote wirelessly (the iPad will display your presenter notes whilst the AppleTV shows the slides) but you can also play games like Real Racing 2 HD completely wirelessly using your iPad as a controller. This is truly remarkable stuff and something that I know is going to be huge once iOS 5 comes out in a few months time.

I put together a brief video to demo this a little better but please feel free to get in touch on Twitter or via email if you have any questions.