Today I noticed a slightly worrying bug in iOS. In-App Purchases seem to be using the internal reference name rather than the localized display name. As an example here is my config for one of the consumable IAPs in WallaBee: 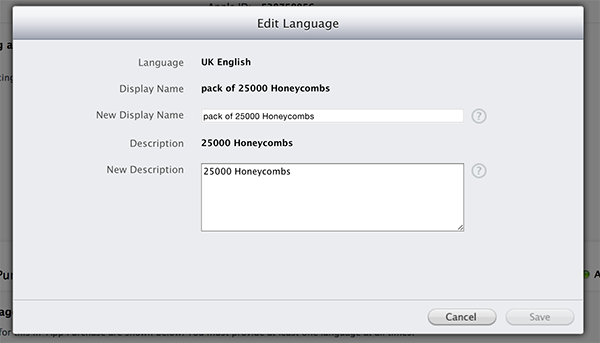 The reference name is ‘v1.1 25000 Honeycombs’1 and the display name for UK English is ‘pack of 25000 honeycombs’. This means the purchase screen ends up looking like this: 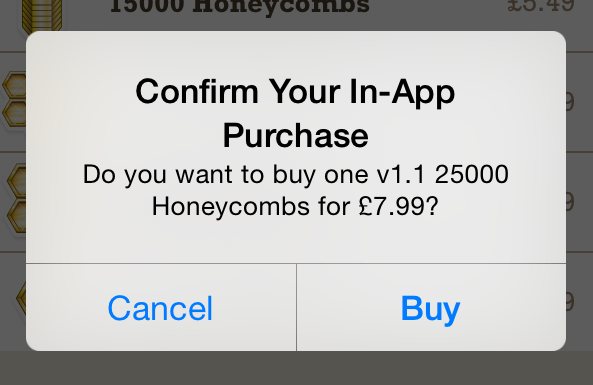 I double checked the In-App Purchase Configuration Guide and it still states that:

In the Reference Name field, enter an internal name for the product.

I’ve not been able to see this in other apps as most people will use the same display name and reference name. I’ve reported a bug with the Apple Bug Reporter Filed as 18454842.

You may want to check your own IAPs to make sure the reference name looks ok until this gets fixed. You can change them without going through App Review (as they aren’t supposed to be visible to end users).

Update (26th September 2014): Tony McBride emailed me to say that he was experiencing the same issues on iOS 7 building against the iOS 7 SDK. I’ve confirmed it is happening in WallaBee v1.4.1 (built with iOS 8 SDK) running on iOS 7. Looks like it may be an App Store issue rather than an iOS 8 issue. I’ve updated this post to remove references to it being a solely iOS 8 problem.

IslandBreak » « How not to deliver a speech