I’ve been running my Kylo Ben website about video games since October 2016 and this year I decided to start doing a weekly update about gaming news and what I’ve been playing. Whilst it is fun to do, it is very time consuming as I need to collate interesting links I’ve found, my articles, podcasts, game releases, games I’ve played, and games I’ve purchased which means an average post will take between 1.5 to 2 hours to write. Being a developer means I can build my own digital tools to help me out and so last week I built a few little tools to help cut that time dramatically.

One of the bigger pieces of the weekly roundup is a list of interesting news that has happened in the world of video games. Initially I would copy and paste the URLs of interesting links I found and save them into the Notes app1 on iOS or Mac. This worked fine but it was a little clunky and getting the data back out took time as I’d need to open each one to see what it was and then add Markdown syntax to each URL I wanted to use. To solve this, I wrote an iOS app and a macOS app that would provide extensions for URLs allowing me to quickly save them to my database. 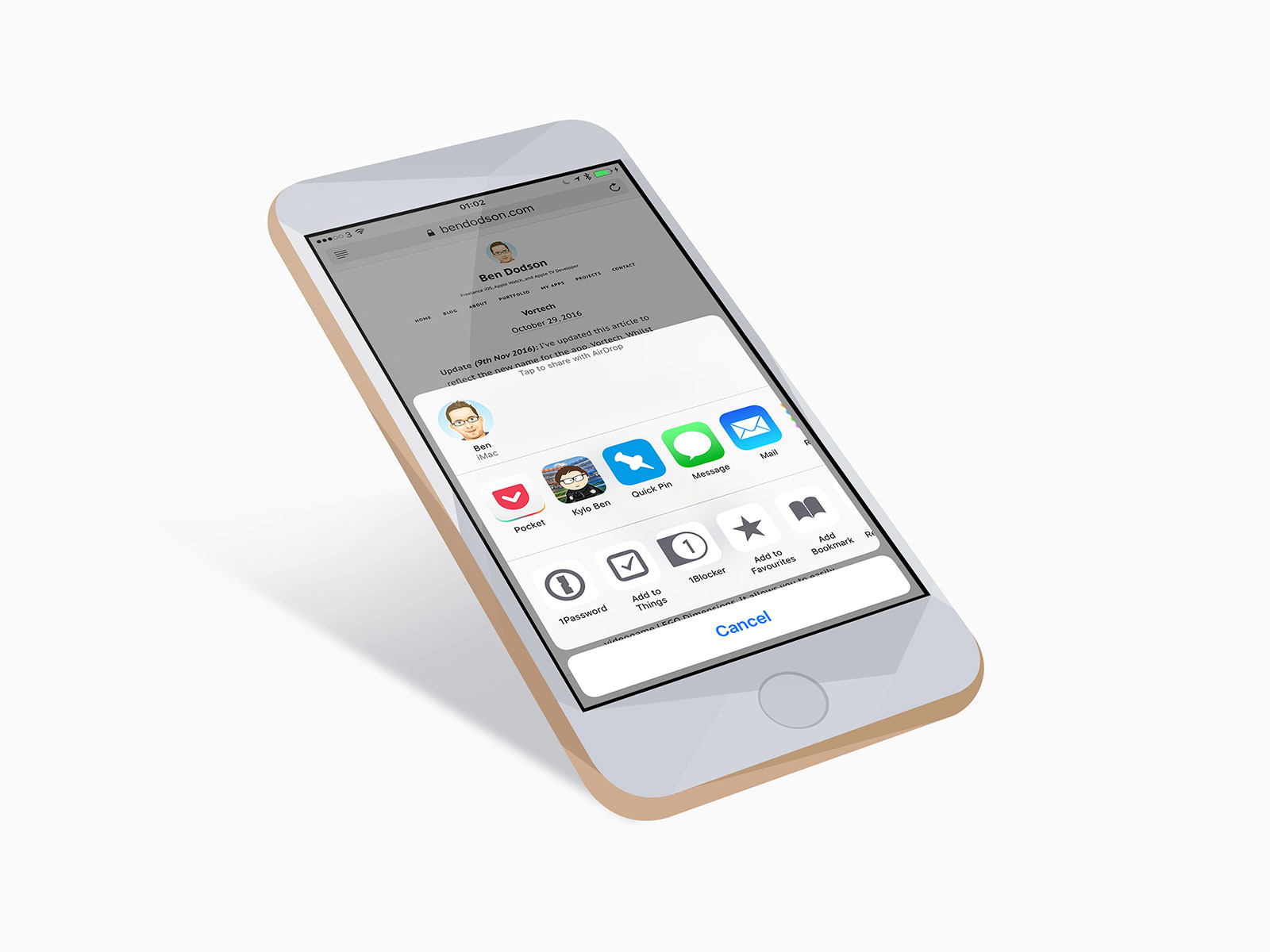 The iOS app is purely a blank view controller with a bundled share extension that looks a little like this2:

This is paired with an NSExtensionActivationSupportsWebURLWithMaxCount entry in the Info.plist file so that it will activate whenever I try and share a URL anywhere within iOS. If I’m in an app reading an article that I want to save, I simply tap the share icon and then choose the Kylo Ben app from the list as shown in the screenshot above. The URL and title will then be sent to my server for retrieval later on.

When I click on the controller icon, the method above is called and the URL and title are sent to my server; once completed, the page reloads to show me it has been successful. I spent a long time trying to just get a simple alert to display on either success or failure but I couldn’t get it to work correctly. It is possible to interact with JavaScript and I was able to log to the console but any alert would silently fail. If anybody has any tips on that, I’d love to know how to improve it.

The basic template of my weekly update is the same every week and I used to use a number of custom MySQL queries to pull out the various information I needed and then write it up manually. Now that I have my links stored in my database, I decided to write a PHP script to generate as much of my update as possible so all I need to do is fill in some of the blanks that aren’t automatically provided (i.e. upcoming game release dates) and write my own thoughts and opinions around the news articles. I have a basic PHP script which runs a number of MySQL queries and then generates a Markdown document like this:

The news URLs are simply pulled from the database and wrapped up so that each link uses the title of the page as provided by the macOS and iOS extensions. I will nearly always change the link title (as it’ll be part of a sentence) but it allows me to quickly see what an article is about without needing to open it up and re-read it. The “my posts” section requires no editing at all as it pulls the title, link, and a pull quote directly from the articles I’ve published in the previous week. The podcasts and upcoming game release sections can’t be automatically populated (yet) so I just use placeholder text for these to reduce the amount of effort required. The final section on my gaming time uses a number of queries to get the exact amount of time I’ve spent playing in the past week, adds placeholders for each game so I can write about them, and then lists out any new games I’ve added to my library; all of this is thanks to some scripts I wrote a while back that scrape my Steam and Xbox One libraries to track changes and allow me to render a page showing my gaming time for the past few months.

Once I’ve finished writing, the Markdown file is uploaded to my server and the weekly update will then appear on the website. I then use Byword’s “copy as HTML” feature to generate a HTML version and use that with Mailchimp to write and send out the email version of the update.

With these tools, I can now write my weekly update pretty quickly and only have to focus on what I want to say rather than spending time on copying, pasting, and formatting. If you’re interested in video games, sign up to the weekly email as it is the best way to get a digest of what has been happening over the past week as well as seeing what new games are arriving.